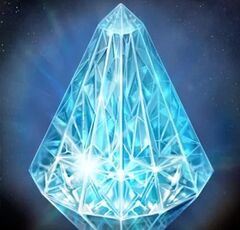 The Eternity Crystal was a powerful component part of the Eternity Project, devised by Brother Varlos of the Darksmith Collective.

Led and overseen by Brother Varlos the project was abandoned following the Mordane Incident before completion and the crystal was hidden. It was later found buried on the Earth's Moon (in the 30th century) and reawakened, whereupon it animated moondust to attack and defend.

The Doctor managed to contain the power and influence of the crystal by securing it in a stasis box onboard the TARDIS, but the Darksmith Collective, having at long last detected its signal dispatched a robot Agent to retrieve it at all costs.

For a brief while the Agent recovered the Crystal from the Doctor after it had animated the dead on the planet Mordane, and returned to Karagula with it. It did not remain with the Darksmith Collective for long before the Doctor recovered it and went in search of Brother Varlos on the planet Flydon Maxima...[source needed]

Retrieved from "https://tardis.fandom.com/wiki/Eternity_Crystal?oldid=461797"
Community content is available under CC-BY-SA unless otherwise noted.