85 (shown inside and spine only)

In response to a warning of great danger given by the White Guardian, the Doctor sets new co-ordinates and the TARDIS materialises on the heaving deck of an Edwardian racing yacht.

But the Doctor soon discovers that this is no ordinary yacht - and no ordinary race. Captain Striker is competing for an unusual prize - 'Enlightenment.'

The crew will be lucky to reach port safely - but with such a prize would they be lucky to win?

This Target Book was released as an audiobook on 3 September 2020 complete and unabridged by BBC Audio and read by Steven Pacey. 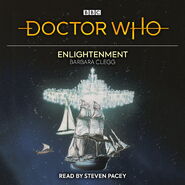