Elliot was born in 4302. He disciplined his son harshly, seeking to instil his own traits in him.

When Kazran came of age, he handed him down his machine which controlled the cloud bank of Sardicktown, to use to control the people of the town "like cattle". Elliot used isomorphic controls to ensure it only worked for himself and Kazran.

As his son grew older, he became more like Elliot Sardick, so much so that his younger self mistook his older self for his own father. After Elliot's death in 4378, Kazran remained so fearful of his father that he couldn't even stand to be in view of the painting of him. The Doctor theorised that the reason Kazran feared Elliot and despised Christmas was due to the fact that he was terrified of becoming like his father, the Doctor then assured Kazran that he wasn't, due to the fact that Kazran was unable to hit a child.(DW: A Christmas Carol) 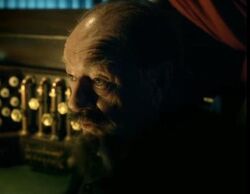