You may be looking for BBC Books prose series.

The series was originally marketed as "The New Eighth Doctor Adventures", but Big Finish Productions had largely dropped the word "New" by the series' fourth and final series. They differed substantially in price and format from Big Finish's monthly line. On the Big Finish podcast, these stories were sometimes informally called "the eighth Doctor and Lucie adventures".

The series first debuted on BBC Radio 7 with the first part of Blood of the Daleks on 31 December 2006. Each episode of the first season was broadcast alongside a 10 minute making of entitled Beyond the Vortex. However, the second, third and fourth series debuted on CD prior to their radio broadcasts, carrying over to Radio 7's rebranded successor, BBC Radio 4 Extra.

For the third series, Big Finish introduced a unique release method. The series format changed to a series of 16 25 minute episodes as opposed to 50 minute episodes. In absence of a 2009 TV series, a new episode was released as a download every Saturday evening on a weekly basis, and subscribers would be able to receive the physical CD upon release. However, this release method did not carry over to the fourth season. In the case of the third season, its radio broadcast was heavily condensed and only stories which did not feature returning monsters (Orbis, The Beast of Orlok, The Scapegoat and The Cannibalists) were presented in edited forms.

The series was notable for driving the Eighth Doctor towards the darker personality as seen in the following audio series, Dark Eyes. Additionally, it introduced a third variation on the Eighth Doctor's theme tune composed by Nicholas Briggs, although the David Arnold arrangement was used during the first series.

Main article: The Eighth Doctor: The Further Adventures of Lucie Miller: Volume One

Due to Big Finish's 2019 website redesign, stories starring the Eighth Doctor from the Classic Series - Special Releases and Bonus Releases brands were moved to this range. 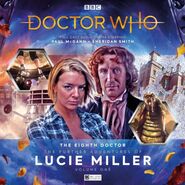 The Eighth Doctor: The Further Adventures of Lucie Miller: Volume One