Echoes of Extinction was a special Big Finish Productions audio story released on download and on vinyl and released in conjunction with the Time Lord Victorious series. It was written by Alfie Shaw, and featured Paul McGann as the Eighth Doctor on Side A and David Tennant as the Tenth Doctor on Side B.

Trapped, a haunted monster waits to consume new victims. It needs help. It needs a doctor. Unfortunately, it also needs to kill whoever it meets. Thrust into immediate danger, and on the back-foot, it will take all of the Doctor's ingenuity to triumph. 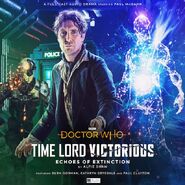 The Eighth Doctor Side 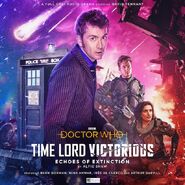 The Tenth Doctor Side