Dr. Who and the Daleks (theatrical film)

Dr. Who and the Daleks

The Story of the Film

Dr. Who and the Daleks

You may wish to consult Doctor Who and the Daleks for other, similarly-named pages.

Dr. Who and the Daleks was the first theatrical film based on Doctor Who. As an adaptation of The Daleks, it stars Peter Cushing as the human scientist Dr. Who, who invents Tardis and takes his companions on a journey to the planet Skaro, where they help the peace-loving Thals battle the evil Daleks.

Accidentally thrown together, Dr. Who, his granddaughters Barbara and Susan, and their friend Ian cross the universe in Who's new invention, the space and time machine known as "Tardis". When they land on the planet Skaro, the travellers meet the kind and placid Thals, who live in fear of the dreaded Daleks. Somehow, Dr. Who and his party must find a way to help the Thals overcome the deadly mutants who live inside impenetrable metal casings.

Dr. Who and his granddaughters, Susan and Barbara, show Who's latest invention, a time and space machine called "Tardis", to Barbara's boyfriend Ian. When Ian accidentally activates the machine, it takes them to a petrified jungle inhabited only by a petrified lizard-like animal. Who discovers that the ground is merely ashes, burned by a terrible heat, and, when Susan sees a huge futuristic city, they realise that they must be on another planet and possibly in another time.

Ian and Barbara are unnerved by the jungle and demand to return to London but Dr. Who, eager to investigate the city, fakes a leak in one of the vital Tardis fluid links to keep them on the planet. The group decide to search the city for the mercury needed to refill the link but stumble across a case of drug vials as they leave. In the city, Dr. Who, on reading a Geiger counter, realises that the planet is radioactive and in view of the fact that they are feeling unwell, deduces that they are developing radiation sickness. Suddenly, cyborgs known as "Daleks" appear and capture the travellers, confining them to a cell and seizing Dr. Who's fluid link for inspection. The Daleks later explain that many centuries ago, there were two peoples on this planet: the Daleks and the Thals, but, after "the Neutronic War", the Daleks were confined in their metallic skirts, and the Thals had "horrible mutations", but Who deduces that they used the drug to survive.

The Daleks hear the travellers talking about the Thal drug and want to reproduce it in large quantities so that they can leave the city and exterminate the Thals. They offer to let the humans use some of the drug to cure their sickness if the vials left outside Tardis are brought to the city. Whilst carrying out the task, Susan encounters Alydon, the Thal leader who left the vials. Alydon gives Susan a secondary drug supply to use in case the Daleks deviate from their promise and also lends her his plastic cape.

The Daleks discover Susan's secret drug supply, but allow the humans to treat themselves with it. They then summon Susan to write a letter to the Thals, informing them that they wish to end post-war hostilities and will leave food in their control room as an act of friendship. The adventurers discover that when the Thals arrive, however, they will be ambushed and exterminated.

When a Dalek comes to the cell to deliver food and water, Dr. Who and his companions immobilise it by forcing it onto Susan's cape, thus insulating it from the charged metal floor. Ian takes the place of the creature inside the casing and notifies another Dalek that he is taking Who, Barbara and Susan to the control room for questioning. Now free, the travellers shout a warning to the Thals who are entering the city and escape with them into the jungle, but not before an elderly man, Temmosus, is killed by the Daleks.

Later the Daleks test the Thal drug on a number of themselves but find that it causes disastrous side effects. With no way of leaving the city, they decide to detonate a neutron bomb to increase the radiation on the planet to a point at which not even the Thals can survive.

At the Thal camp, Who urges Alydon to fight the Daleks to secure a safe future for his species. Alydon insists that the Thals are pacifists, but Dr. Who tests this claim by ordering Ian to take Dyoni, Alydon's love, to the Daleks in exchange for the confiscated fluid link. Alydon punches Ian to the ground, proving that Thals will fight for some things. Alydon, Susan and Dr. Who lead the tribe to the front entrance of the city, where they attempt to confuse the enemy's scanners by reflecting light off small mirrors to give the impression of greater numbers. The plan fails when the Daleks appear and the Thals scatter, however, and Susan and Dr. Who are captured.

Meanwhile, Ian and Barbara, guided by the Thals Ganatus, Antodus and Elyon, set out to infiltrate the city from the rear. While navigating a swamp, Elyon is killed by a marsh-dwelling mutation and the party is eventually forced to jump a chasm to proceed any further. Antodus falls short and plunges into the void, but manages to cling to the uneven rock face and is pulled up by the others.

In the city control room, the Daleks ignore Dr. Who's appeals as they start the bomb countdown. Ian, Barbara, Ganatus and Antodus penetrate the city and join Alydon and the rest of the Thals, who have returned determined to rescue Susan and Dr. Who. The Thals and humans enter the control room and struggle with the Daleks while Dr. Who yells for someone to stop the bomb detonation. Ian calls out his presence and dives for cover as the Daleks fire towards him in unison. The Daleks inadvertently destroy their own control panel, disabling themselves as well as freezing the countdown. Dr. Who then retrieves the Tardis fluid link.

In the jungle, the Thals bid farewell to Dr. Who and his companions and express their gratitude with special gifts of Thal capes, which Dr. Who says they will treasure. When the travellers depart in Tardis they materialise not in London, however, but on an ancient battlefield in front of an advancing Roman army, much to Ian's dismay and demands his fellow travellers to assist him to escape. 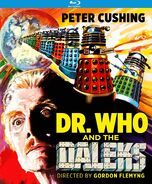 The film will see a 4K Ultra HD/Blu-ray combo release on 20 June 2022 by StudioCanal and will be available in Collector's Edition packaging and steelbook packaging. Both discs will contain a new 4K restoration.[3]

No novelisation based upon the film script was ever published. However, the original teleplay, The Daleks, was adapted as Doctor Who in an Exciting Adventure with the Daleks by David Whitaker, published by Frederick Muller in late 1964. Later, when the book was republished by Target Books, it was retitled Doctor Who and the Daleks.

A new book about the making of both films Dr Who & The Daleks: The Official Story of the Films by filmmaker John Walsh is to be published by Titan Publishing Group in September 2022.

Dr. Who and the Daleks was adapted as an American comic book by Dell Publishing in 1966 (the year the film was released in the US). The comic book featured artwork by Dick Giordano and was the first US comic book appearance of anything connected to the Doctor Who franchise. It was reprinted in the UK by Marvel Comics UK in Doctor Who Classic Comics #9.