Down the Middle (anthology)

Down the Middle was an anthology published by Arcbeatle Press. It was the first full instalment in Cwej: The Series, a spin-off starring Chris Cwej, a former companion of the Seventh Doctor. It was comprised of 28 short stories, and featured characters and concepts from various other series, some spin-offs, and others which weren't originally connected to the DWU, but crossed over for the duration of the antholgy.

Vignettes of an Uprising, the last entry in Down the Middle acted as linking material for the previous short story, Rebel Rebel.

Chris Cwej. Once, a policeman, tasked with maintaining order through the galaxy. Once, a traveler through space and time, righting wrongs with his friends.

Now – an operative for powers far beyond humanity's comprehension. A soldier in cosmic games, trying to obey the commands of his Superiors, but facing, time and again, heartbreak and sacrifice. Far from everything and everyone he once cared about, and drifting through an infinity of wars, conspiracies and betrayals...

These are his stories – tales of unlikely allies, of doomed love affairs and of wild interventions in Earth's history. From battlefields to cozy meetings with adventuress Iris Wildthyme: a chronicle of a man split down the middle.

CWEJ: DOWN THE MIDDLE is an officially-licensed anthology continuing the adventures of the character created for the Virgin New Adventures book line, featuring contributions from Doctor Who writers Andy Lane (Original Sin, All-Consuming Fire, A Thousand Tiny Wings) and Simon Bucher-Jones (The Death of Art, The Taking of Planet 5), alongside a vast panel of new and diverse talents. 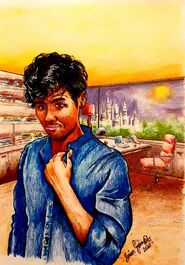 Hearts of Gold by Brian Gorman 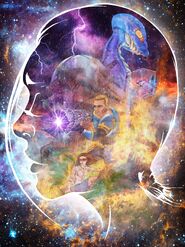 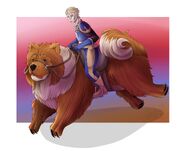 The Eternal by Dawn Rushim 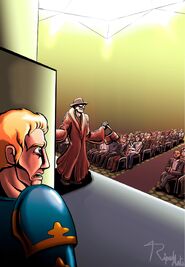 The Psycon Prediction by D. Dobedier 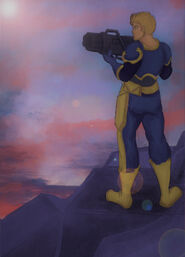 Back cover by Johannes Chazot