Dominion was the first story in Big Finish Productions' Doctor Who Special Releases range in 2012. This was also a continuation of Big Finish's UNIT audio series (as indicated by the numbering on the spine of the CDs as 2.1 etc); the last story of that series The Wasting had been released in 2005. According to Nicholas Briggs on the behind the scenes CD this story was much about doing another UNIT series featuring the Doctor, unlike the previous series which barely mentioned him. This story saw the return of Tracey Childs as Dr Elizabeth Klein who had last appeared in The Architects of History in 2010 and Beth Chalmers as Raine Creevy who last appeared in Earth Aid.

This story is the debut story for another incarnation of the Master, played by Alex Macqueen who masquerades (and is credited) as "the Other Doctor", a supposed future incarnation, and for the first 3 parts of the story he is the Doctor of the story filling the role that the Doctor would normally fill in a story of this style. The Master has Goth's TARDIS, suggesting this story is set after The Deadly Assassin; however there is no further information that allows for precise placement of when in the Master's timeline this incarnation of the Master fits until his later appearance in Eyes of the Master.

At four 60 minute parts, this is the single longest story to feature the Seventh Doctor, having a running time of four hours, double the length of most stories featuring him.

The TARDIS the Master uses as depicted on the cover for the first part is that of the Eleventh and Twelfth Doctor's, one of the rare instances where Big Finish have been allowed to incorporate New Series elements. This tied into the fakeout that McQueen was a future Doctor. 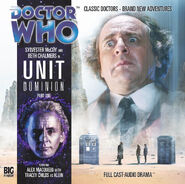 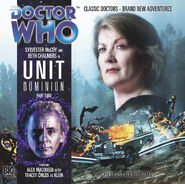 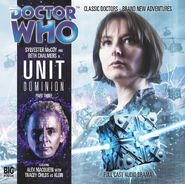 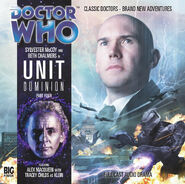 Retrieved from "https://tardis.fandom.com/wiki/Dominion_(audio_story)?oldid=2628569"
Community content is available under CC-BY-SA unless otherwise noted.