Doctor Who and the Web of Fear (novelisation)

Doctor Who and the Web of Fear

The Web of Fear

72 (given to later editions)

Forty Years the Yeti had been quiet. A collector's item in a museum. Then without warning it awoke - and savagely murdered.

At about the same time patches of mist began to appear in Central London. People who lingered anytime in the mist were found dead, their faces smothered in cobwebs. The cobweb seeped down, penetrating the Underground System. Slowly it spread....

Then the Yeti reappeared, not just one but hordes, roaming the misty streets and cobwebbed tunnels, killing everyone in their path. Central London was gripped tight in a Web of Fear...

'IT'S LIKE A NIGHTMARE. AN ENEMY WE CAN'T SEE OR TOUCH, WHO KNOWS OUR EVERY MOVE.'

For forty years the Yeti had been quiet, a simple museum exhibit. Then without warning it wakes, and savagely murders. Meanwhile patches of mist begin to appear in central London. People who linger in the mist are found dead, their faces smothered in cobwebs. The Cobwebs seep down, penetrating the Underground System, expanding... Then the Yeti reappear, not just one but hordes, roaming the misty streets and cobwebbed tunnels, killing everyone in their path. The Doctor, Jamie and Victoria must unite with the young Colonel Lethbridge-Stewart to stop the deadly menace.

This is the first story to feature Alistair Lethbridge-Stewart. Cover artist Alister Pearson's reference for the Doctor is a photo from The Mind Robber. The artwork for this edition featured on a postcard free with issue 203 of Doctor Who Magazine (1 September 1993).

The TARDIS is engulfed by a mysterious web-like substance in space. Breaking free, the Doctor and his companions Jamie and Victoria land in the London Underground system. But a spreading killer mist has meant that London has been evacuated. The Great Intelligence is back - and its robot Yeti are roaming the streets and the underground tunnels.

The Doctor, Jamie and Victoria team up with an old army unit working with their friend Professor Travers to combat the menace. They soon realise, however, that someone in the group must be working for the Intelligence. With time running out, the Doctor and his friends release they can trust no one...

For 40 years Professor Travers' Yeti had been quiet, a collector's item in a museum. Then without warning, it awakes and savagely murders. Patches of mist begin to appear in Central London, those who linger in it found dead, their faces smothered in cobwebs.

When the Doctor, Jamie and Victoria arrive in the London Underground, they find that the web is remorselessly spreading. What's more, hoards of Yeti are roaming the misty streets and cobwebbed tunnels, killing everyone in their path. London has been gripped tight in a web of fear.

The Doctor and his friends unite with the army, led by one Colonel Lethbridge-Stewart, in defence of the Earth. But an old enemy is lurking in the shadows...

This Target Book was released as an audiobook on 3 August 2017 complete and unabridged by BBC Audio and read by David Troughton. 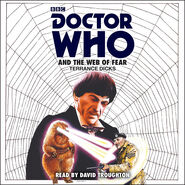