Doctor Who and the War Games (novelisation)

Doctor Who and the War Games

70 (given to later editions)

You may be looking for the book that exists within the DWU.

Doctor Who and the War Games was a novelisation based on the 1969 television serial The War Games.

Mud, barbed wire, the smell of death... The year is 1917 and the TARDIS had materialised on the Western Front during the First World War.

Or had it? For very soon the Doctor found himself pursued by the soldiers of Ancient Rome; and then he and his companions were reliving the American Civil War of 1863. And was this really Earth, or just a mock-up created by the War Lords?

As Doctor Who solves the mystery, he has to admit he is faced with an evil of such magnitude that he cannot combat it on his own - he has to call for the help of his own people, the Time Lords.

So, for the first time, it is revealed who is Doctor Who - a maverick Time Lord who 'borrowed' the TARDIS without permission. By appealing to the Time Lords he gives away his position in Time and Space. Thus comes about the Trial of Doctor Who...

I THINK WE HAVE ARRIVED IN ONE OF THE MOST TERRIBLE TIMES IN THE HISTORY OF THE EARTH...'

Mud. Barbed wire. The smell of death. The year is 1917 and the TARDIS has materialised on the Western Front during the First World War.

Or has it? Escaping from execution by firing squad, the Doctor, Jamie and Zoe meet charioteers from Ancient Rome, Georgian Redcoats, and Confederates from the American Civil War.

Someone - someone as knowledgeable as the Doctor himself - has created a simalcrum of Earth, and has gathered soldiers from every era of the planet's bloody history. And someone is playing war games.

This adventure was first broadcast on television in 1969. It marked the end of Patrick Troughton's tenure of the role of the Doctor, and it revealed for the first time something of the Doctor's past and of his fellow Time Lords. This novelization, first published in 1979, is by Malcolm Hulke, one of the writers of the original television script.

Doctor Who - The War Games is available as a BBC Video and will be broadcast on BSB television during 1990.

This Target Book was released as an audiobook on 3 February 2011 complete and unabridged by BBC Audio and read by David Troughton. 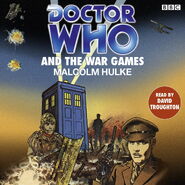