Doctor Who and the Visitation (novelisation)

Doctor Who and the Visitation

69 (given to later editions)

Tegan, the young air hostess who quite unintentionally became a member of the TARDIS's crew, wants to return to her own time, but when the Doctor tries to take her back to Heathrow Airport in the twentieth century the TARDIS lands instead on the outskirts of seventeenth-century London.

The Doctor and his companions receive a decidedly unfriendly welcome - but it soon becomes clear that the sinister activities of other visitors from time and space have made the villagers extremely suspicious of outsiders.

As a result of the aliens' evil schemes, the Doctor finds himself on the point of playing a key role in a gruesome historical event...

"CALL YOURSELF A TIME LORD?" TEGAN SHOUTED. "A BROKEN CLOCK KEEPS BETTER TIME THAN YOU!"

The Doctor tries to return Tegan to the Heathrow she left in 1981, but instead the TARDIS lands just outside London in 1666 - the year of the Great Plague.

The Doctor and his companions receive a decidedly cool welcome - and it soon becomes clear that the sinister activities of other visitors from space and time have made the villagers extremely sensitive of outsiders.

And as a result of the aliens' evil schemes, the Doctor finds himself on the point of playing a key role in a gruesome historical event.

This is a novelization by Eric Saward of his own television story, first broadcast in 1982.

Trying to get Tegan back to Heathrow in 1981, the Doctor brings the TARDIS to the right place, but over 300 years early - to 1666. They are not the only visitors as Death stalks the local woods, complete with cloak, scythe and a skull like face.

In fact, 'Death' is and android bought by a group of alien Terileptils whose spaceship has crashed. Criminals and fugitives from their own race, they now plan to take over Earth. With Adric and Tegan captured, the Doctor and Nyssa try to deal with the deadly android, and a group of local villagers under the control of the Terileptils.

But even if they succeed, can they prevent the Terileptils from unleashing an even more deadly form of the Black Death? 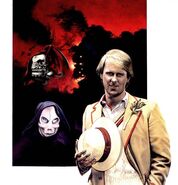 This Target Book was released as an audiobook on 4 October 2012 complete and unabridged by BBC Audio and read by Matthew Waterhouse. 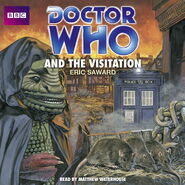