Doctor Who and the Underworld (novelisation)

Doctor Who and the Underworld

67 (given to later editions)

Exploring the very edge of the known universe, the Fourth Doctor, Leela and K9 discover a group of astronaunts searching for the lost gene bank of the Minyan race. During the perilous voyage, the astronauts' craft plunges into the heart of a recently formed planet, wherein an awesome secret is hidden.

How will the Minyan quest end?

What must the Doctor wrest from the Heart of the Oracle?

This Target Book was released as an audiobook on 6 May 2021 complete and unabridged by BBC Audio and read by Louise Jameson with K9's voice by John Leeson. 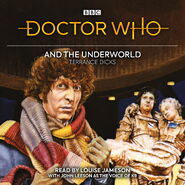