Doctor Who and the Tomb of the Cybermen (novelisation)

Doctor Who and the Tomb of the Cybermen

The Tomb of the Cybermen

66 (given to later editions)

The Cybermen - silver, indestructible monsters whose only goal is power - seem to have disappeared from their planet, Telos. When a party of archaeologists, joined by the Doctor, Jamie, and Victoria, land on the Cybermen's barren, deserted planet, they uncover what appears to be their tomb.

But once inside it becomes clear that the Cybermen are not dead, and some in the group of archaeologists desperately want to re-activate these monsters! How can the Doctor defeat these ruthless, power-seeking humans and the Cybermen?

THE CYBERMAN WENT ON RAISING HIS GUN, SLOWLY, SLOWLY...

The Cybermen - indestructible, unfeeling monsters whose only goal is power - have now disappeared from the planet Telos, and when a group of archaeologists, accompanied by the Doctor and his companions, land on the barren, deserted world, they discover what appears to be their tomb.

But once inside, it becomes clear that the Cybermen are not dead, and some of the scientists are intent on re-activating the monsters. How can the Doctor prevent these ruthless humans from awakening the Cybermen?

The Tomb of the Cybermen was first broadcast in 1967 and was thought lost forever until it was rediscovered in 1992 and released on video. Gerry Davis's novelization is based on the original story he wrote with Kit Pedler.

This Target Book was released as an audiobook on 7 March 2013 complete and unabridged by BBC Audio and read by Michael Kilgarriff, with Cybermen voices by Nicholas Briggs. 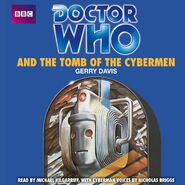 Community content is available under CC-BY-SA unless otherwise noted.
... more about "Doctor Who and the Tomb of the Cybermen (novelisation)"
RDF feed
Doctor
Second Doctor +
Has image
File:Tomb of The Cybermen novel.jpg +
Isbn
ISBN 0-426-11076-5 +
Publisher
Target Books +  and W.H. Allen & Co +
Advertisement