Doctor Who and the Time Warrior (novelisation)

Doctor Who and the Time Warrior

65 (given to later editions)

His spaceship crippled in an inter-stellar battle, the Sontaran warrior, Linx, is forced to crash-land on earth. He arrives in the Middle Ages, a time too primitive to provide the technology he needs to repair his ship. Allying himself with the local robber chief, Linx uses his powers to `borrow' scientists and equipment from twentieth-century earth.

Doctor Who tracks down the missing scientists and journeys into the past to save them. But can he defeat the ruthless Linx and his savage human allies before the course of human history is changed forever?

'IT WAS THE DEVIL'S WORK, CAPTAIN...THIS WIZARD THEY CALL THE DOCTOR THREW ALL THE FIRES AND STENCHES OF HELL AT US!'

Linx, the Sontaran Warrior, crash-lands his space-craft on Earth after being crippled by an inter-stellar battle with the Rutans. Unfortunately for him, he's landed in Medieval Wessex, where life is primitive and the technology to repair his hasn't been invented yet. He allies himself with the local bandit-chief Irongron, and builds a crude time-machine in order to snatch the people and equipment he needs from the twentieth century. Meanwhile, the Doctor, who is searching for these missing scientists, transports himself and Sarah Jane to their place of capture - the foul medieval lair of Irongron's castle, where the axe meets the ray-gun, in the hostile environment of the Middle Ages.

This was the first Doctor Who TV adventure which featured Elisabeth Sladen as Sarah Jane the stowaway reporter, and revealed the name of the Time Lords' planet, Gallifrey.

This Target Book was released as an audiobook on 13 November 2008 complete and unabridged by BBC Audio and read by Jeremy Bulloch. 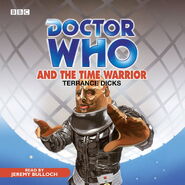