Doctor Who and the Tenth Planet (novelisation)

Doctor Who and the Tenth Planet

62 (given to later editions)

The Sergeant blinked again. Three lights were moving towards him through the murk of the blizzard. Even as he looked, the lights changed into three tall, straight figures, clad in silver-armoured suits, advancing across the ice with a slow deliberate step. Horror-struck, the Sergeant reached for his gun, and a stream of bullets sprayed across the marching figures. BUT THEY CONTINUED MARCHING...

The CYBERMEN have arrived. The first invasion of Earth by this invincible, fearless race-and the last thrilling adventure of the first DOCTOR WHO.

THE TALL FIGURES, EACH ONE SEEMINGLY CLAD IN A SILVER ARMOURED SUIT, CONTINUED TO MOVE INEXORABLY TOWARDS THEM...

When the TARDIS materialises in the middle of a snowstorm, Ben and Polly, driven to distraction by weeks cooped up in the time ship, insist on going outside with the Doctor. As they battle through the storm, they are unaware that they are being watched - and unaware that the planet is about to be invaded by creatures deadlier than any it has seen before...

"We were exactly like you once. Then our cybernetic scientists realised that our race was weakening. Our scientists and doctors invented spare parts for our bodies until we could be almost completely replaced."

The TARDIS brings the Doctor and his friends to a space tracking station in the Antarctic - and straight into trouble. A space mission is going badly wrong, and a new planet has appeared in the sky.

Mondas, ancient fabled twin planet of Earth, has returned. Soon its inhabitants arrive. But while they used to be just like the humans of Earth, now they are very different. Devoid of emotions, their bodies replaced with plastic and steel, the Cybermen are here.

Humanity needs all the help it can get, but the one man who seems to know what is going on is terminally ill. As the Cybermen take over, the Doctor is dying...

Featuring the First Doctor as played by William Hartnell in his very last adventure, and his companions Ben and Polly.

This Target Book was released as an audiobook on 7 December 2017 complete and unabridged by BBC Audio and read by Anneke Wills with Cyberman voices by Nicholas Briggs. 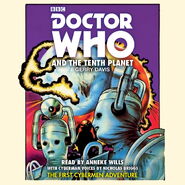