Doctor Who and the Talons of Weng-Chiang

Stepping out of the TARDIS into Victorian London, Leela and the Fourth Doctor are confronted by menacing, diabolical horrors shrouded within the swirling London fog – a man's death cry, an attack by Chinese Tong hatchet men, giant rats roaming the sewers, young women mysteriously disappearing...

The hideously deformed Magnus Greel, conducting a desperate search for the lost Time Cabinet, is the instigator of all this evil. Posing as the Chinese god, Weng-Chiang, Greel uses the crafty Li H'sen Chang, and the midget Manikin, Mr Sin, to achieve his terrifying objectives. The Doctor must use all his skill, energy and intelligence to escape the talons of Weng-Chiang.

This Target Book was released on 1 January 2013 complete and unabridged by BBC Audio and read by Christopher Benjamin. 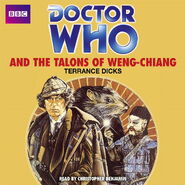 Retrieved from "https://tardis.fandom.com/wiki/Doctor_Who_and_the_Talons_of_Weng-Chiang_(novelisation)?oldid=2757419"
Community content is available under CC-BY-SA unless otherwise noted.