Doctor Who and the Sunmakers (novelisation)

Doctor Who and the Sunmakers

Megropolis One, Pluto, the far future

60 (given to later editions)

Doctor Who and the Sunmakers was a novelisation based on the 1977 television serial The Sun Makers.

Everyone knows that Pluto is a barren airless rock. So naturally the Doctor is surprised when he discovers artificial suns, an ultra-modern industrial city and a group of colonists being worked – and taxed – to death in this inhospitable and supposedly undeveloped part of the universe ...

With the help of his companion Leela and the faithful K9, the Doctor takes on the mysterious and powerful Company, ruthless exploiter of planets and their people.

1989 Star Books edition.
Front and Back Covers by Jeff Cummins and Andrew Skilleter

This Target Book was released as an audiobook on 7 February 2019 complete and unabridged by BBC Audio and read by Louise Jameson with K9's voice by John Leeson. 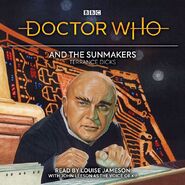