Doctor Who and the Stones of Blood (novelisation)

Doctor Who and the Stones of Blood

The Stones of Blood

59 (given to later editions)

Chanting hooded figures gather inside a ring of ancient stones, using rituals of blood sacrifice to awaken the sleeping evil of the Ogri.

The Doctor and Romana go from the countryside of present day England to a deep-space cruiser trapped in hyperspace in their attempt to track down an alien criminal, and unravel the mystery of the Stones of Blood.

Luckily they have the help of the faithful K9 ...

The stone circle of Bodcombe Tor, in the South West of England, stands in tribute to a mysterious goddess. Long ago, six huge monoliths were arranged in a half circle, with an alter stone in the centre. Then one day, the six stones mysteriously became nine. Stranger still when blood was poured over them it was immediately absorbed...

When the Doctor, Romana and K9 arrive on Bodcombe Moor, they meet the elderly Professor Rumford and her friend Vivien Fay. From them they learn the chequered history of the stones, and of the inhabitants of the nearby manor house - currently one Leonard de Vries, leader of a druidic sect. But all is not as it seems, and soon the Doctor and his companions are enmeshed in a deadly web of deceit. Powerful creatures rampaging across the moor, and the nature of a long family line is called into question. Romana is trapped by a cunning enemy and time is running out for the Doctor and K9...

A different version of this story, written especially by David Fisher, was released as an audiobook on 5 May 2011 by BBC Audio and read by Susan Engel with K9's voice by John Leeson. 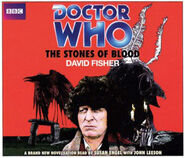