Doctor Who and the State of Decay (novelisation)

Doctor Who and the State of Decay

58 (given to later editions)

Doctor Who and the State of Decay was the Target Books version of the televised serial, State of Decay first broadcast from 22 November 1980. Written by Terrance Dicks, it was a surprisingly straightforward adaptation of the work as televised, given Dicks' stated disdain for script editor Christopher H. Bidmead's changes to his script. (DCOM: State of Decay)

The Pickwick audiobook version of State of Decay is sometimes mistaken for an audio abridgement of this book, but there is no relationship between the two versions.

The cover for the original Target edition featured the artwork of Andrew Skilleter.

The Doctor, Romana and K9 – and a young stowaway called Adric – are trapped in the alternative universe of E-Space.

Seeking help, they land on an unknown planet – and find a nightmare world where oppressed peasants toil for the Lords who live in the Tower, and where all learning is forbidden – a society in a state of decay.

What is the terrifying secret of the Three Who Rule? What monstrous creature stirs beneath the Tower, waking from its thousand-year sleep?

The Doctor discovers that the oldest and deadliest enemy of the Time Lords is about to spring into horrifying action.

This Target Book was released as an audiobook on 7 January 2016 complete and unabridged by BBC Physical Audio and read by Geoffrey Beevers with K9's voice by John Leeson. 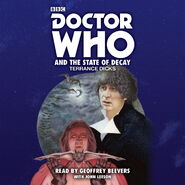