Doctor Who and the Sontaran Experiment (novelisation)

Doctor Who and the Sontaran Experiment

56 (given to later editions)

Landing on Earth, now a barren, desolate planet, Sarah, Harry and the Doctor are unaware of the large, watching robot. The robot is the work of Styre, a Sontaran warrior, who uses all humans landing here for his experimental programmes.

What has happened to the other space explorers who have come here? Why is the Sontaran scout so interested in Earth and is brutally torturing humans, including Sarah Jane? Will the Doctor, be able to prevent an invasion and certain disaster, and save both Earth and his companions?

This Target Book was released as an audiobook on 7 July 2016 complete and unabridged by BBC Physical Audio and read by Jon Culshaw. 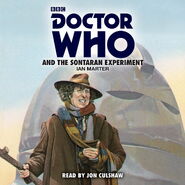