Doctor Who and the Seeds of Doom (novelisation)

Doctor Who and the Seeds of Doom

The Seeds of Doom

Antarctica and England, the 1970s

This was the tenth and final novelisation to be reprinted in America by Pinnacle Books.

In the snowy wastes of blizzard-swept Antarctica, a strange pod-like object is unearthed, buried deep in the ice. Curiosity turns to alarm as the pod begins to grow – then horror when suddenly it cracks open and a snaking green tendril shoots out, mercilessly seeking the nearest live victim...

In London, the botanical experts are bewildered. DOCTOR WHO is called in to fight this unknown horror. But will he be in time to save the Earth from the rapidly spreading tentacles of the KRYNOID, giant man-eating monster from an alien world?

1989 Star Books edition.
Front and Back Covers by Chris Achilleos and Mike Little

This Target Book was released as an audiobook on 5 September 2019 complete and unabridged by BBC Audio and read by Michael Kilgarriff. 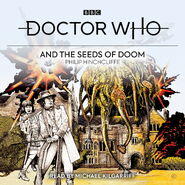