Doctor Who and the Sea-Devils (novelisation)

Doctor Who and the Sea-Devils

54 (given to later editions)

Doctor Who and the Sea-Devils was a novelisation based on the 1972 television serial The Sea Devils.

Whilst visiting the MASTER, who has been exiled to a luxurious castle prison on a small island, DOCTOR WHO and Jo Grant learn that a number of ships have vanished in the area. Whilst investigating these mysterious disappearances, Jo and the Doctor are attacked by a SEA-DEVIL, one of a submarine colony distantly related to the Silurians. Soon they discover that the SEA-DEVILS plan to conquer the Earth and enslave humanity, aided and abetted by the MASTER. What can DOCTOR WHO do to stop them?

When the Doctor and Jo visit the Master in the island prison to which he has been sentenced for life, they learn that a number of ships have mysteriously disappeared at sea.

While investigating they are attacked by a Sea-Devil, one of a submarine species related to the Silurians.

The Doctor uncovers a plot to conquer the Earth and enslave the population. His attempts to prevent it's success are frustrated because the authorities refuse to believe that the Sea-Devils are not a figment of the Doctor's imagination or that the Master is not to be trusted...

This Target Book was released as an audiobook on 7 June 2012 complete and unabridged by BBC Audio and read by Geoffrey Beevers. 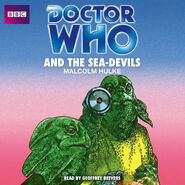