Doctor Who and the Pyramids of Mars (novelisation)

Doctor Who and the Pyramids of Mars

50 (given to later editions)

For many thousands of years SUTEKH had waited ... trapped in the heart of an Egyptian Pyramid. Now at last the time had come – the moment of release, when all the force of his pent-up evil and malice would be unleashed upon the world ...

The TARDIS lands on the site of UNIT headquarters in the year 1911, and the Fourth Doctor and Sarah emerge to fight a terrifying and deadly battle ... against Egyptian Mummies, half-possessed humans – and the overwhelming evil power of SUTEKH!

The mind of Sutekh the Destroyer is consumed with jealousy and hatred. Convinced that all living things are his mortal enemy, he is determined to annihilate all forms of life throughout the universe.

Imprisoned at the heart of an Egypt pyramid, the force of his maniacal evil has been paralysed for centuries. But now, after thousands upon thousands of years of long captivity, the moment of deliverance has arrived.

Sutekh's vicious megalomania is about to be unleashed upon the world - unless the Fourth Doctor succeeds in outwitting a mind so powerful it can force him to his knees and torture him at a glance ...

Returning to UNIT HQ, the Doctor and Sarah are thrown into turmoil when the TARDIS is caught up by a mysterious force. Sutekh, the last of the Osirans has been released from his pyramid prison by Egyptologist Marcus Scarman, and now plans to avenge his imprisonment by destroying all life in the Cosmos.

Professor Scarman, possessed by the spirit of Sutekh, builds a rocket and flies to Mars, for it is here that the mystical eye of Horus lies - the key to Sutekh's prison. Can the Doctor stop the evil Egyptian's path of destruction?

This Target Book was released as an audiobook on 14 August 2008 complete and unabridged by BBC Audio and read by Tom Baker. 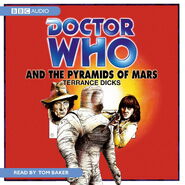