Doctor Who and the Power of Kroll (novelisation)

Doctor Who and the Power of Kroll

The Power of Kroll

49 (given to later editions)

The huge, octopus-like Kroll lived deep in the swamps of the humid, steamy planet.

To the native swamp-warriors, Kroll was an angry, mythical god. To the money-grabbing alien technicians, Kroll was a threat to a profit-making scheme.

In their search for another segment of the Key to Time, the Fourth Doctor and Romana have to face the suspicion of the Lagoon dwellers, the stupidity of the technicians and, finally the power of Kroll ...

THE POWER OF KROLL is a novel in the Key to Time Sequence. Also available THE RIBOS OPERATION, |THE STONES OF BLOOD and THE ANDROIDS OF TARA.

This Target Book was released as an audiobook on 7 October 2021 complete and unabridged by BBC Audio and read by Geoffrey Beevers. 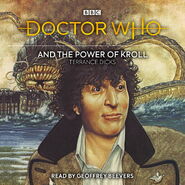