Doctor Who and the Pescatons (audio story)

Doctor Who and the Pescatons

Doctor Who and the Pescatons was the first original, officially licensed audio drama based upon Doctor Who. Originally released by Argo Records, the story featured Tom Baker and Elisabeth Sladen, as the Fourth Doctor and Sarah Jane Smith. It was divided into two episodes, complete with opening and closing themes, simulating the televised series.

Discounting a couple of radio appearances and an LP version of Genesis of the Daleks with added narration, The Pescatons was the first and last time that Baker participated in an original Doctor Who audio drama until the Hornets' Nest arc in 2009.

The story was unusual because of its first-person perspective. Though first-person narratives weren't entirely without precedent — the earlier Doctor Who in an Exciting Adventure with the Daleks had been written from Ian Chesterton's point of view — this was the first time that a story had been told from the Doctor's perspective, similar to Big Finish Productions' Companion Chronicles series. Until 2010's Dead Air, it remained the only original story narrated by the Doctor himself.

It was also unusual for its depiction of a genocide devised and led by Sarah and the Doctor, without either character displaying even a tinge of remorse.

The Doctor and his companion Sarah battle against some of the most heinous foes to emerge from the outer universe: The Pescatons. The Doctor finds himself in the capital city of London, where the population is bewildered and trembling beneath the violent onslaught of a merciless invader.

Who or what is the mighty Zor, whose green slanting luminous eyes glare out from the dark of night like giant emeralds? What is the powerful alien force that is bringing Earth's civilisation to a standstill, threatening to annihilate everything in its path?

This is the story of a dying Planet, of a Deadly Weed, and the merciless Creatures themselves. It is a Challenge to the Doctor—a frightening race against time...

The TARDIS arrives on a beach by the Thames Estuary at night, and the Doctor and Sarah discover a metallic seaweed there.

The Doctor consults with Professor Emerson, who says that three expeditions to recover a recent meteorite from the bottom of the estuary have all vanished. The Doctor goes diving and is nearly killed by something that wraps itself around him, but then lets him go. He discovers that the meteorite is a wrecked spaceship buried under the estuary, and he knows where it comes from

The Doctor tells Sarah about the Pescatons, a form of carcharhinidae, or deep water shark. Naturally, the experts scoff until one comes out of the Thames and makes its way to London Zoo in search of salt water. The Doctor confronts it in the Aquarium, where it dies and disintegrates.

That night, more meteorites land in the Thames.

London is invaded, and the Doctor recalls his visit to planet Pesca, home of the Pescatons. He fell down a chasm into a cavern and met Zor, the leader of the Pescatons who informed him that they were going to use him to find a new home now that their own planet was drying out as it fell towards their sun. Zor used his hypnotic powers on the Doctor, who fought back and escaped.

Back in London, Sarah finds an abandoned baby while the military try to shoot the invading Pescatons to no avail. The Doctor distracts a Pescaton by singing Hello Dolly and doing a dance so that Sarah can get away with the child. Finally the Pescatons retreated back into salt water, except for one trapped in an Underground tunnel. The Doctor and Sarah go in search of it, and the Doctor starts playing his piccolo to calm his nerves. The Pescaton retreats at the sound.

Professor Emerson helps the Doctor build a high frequency sound trap inside a sewer, and Zor is lured there to be destroyed as the planet Pesca disintegrates in its orbit. Without Zor to control it, the Pescaton invasion ends.

This story has been released several times on both cassette and audio CD. 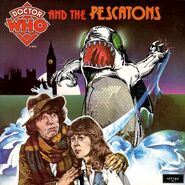 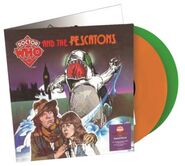 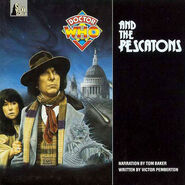 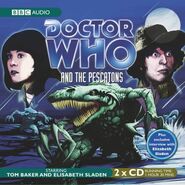 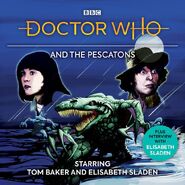