Doctor Who and the Mutants (novelisation)

Doctor Who and the Mutants

44 (given to later editions)

Doctor Who and the Mutants was a novelisation based on the 1972 television serial The Mutants.

A massive shape scuttles out of the darkness and strikes the earth Overlord down. It is a Mutant – a huge insectoid creature. It moves in a crouch, its back arched and scaly, with huge knobbly vertebrae. The controlling Overlord, the Marshal , has ordered all such Mutants killed instantly.

What was happening to the people of Solos? Why are they gradually turning into Monsters? Hands that become claws, flesh that turns scale-like...

When DOCTOR WHO meets the Marshal and Jaegar, he realises that all is not as it appears to be. The Marshal has a sinister plan to gain control of this planet, and DOCTOR WHO must save Solos from this mad earthman, as well as save the Solonians themselves.

This Target Book was released as an audiobook on 4 October 2018 complete and unabridged by BBC Audio and read by Jon Culshaw. 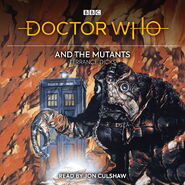