Tardis
Register
Don't have an account?
Sign In
Advertisement
in: 1986 video games, Sixth Doctor stories, Video games with unique variations of the Doctor Who theme, The Master stories
English

Doctor Who and the Mines of Terror (video game)

Doctor Who and the Mines of Terror

Doctor Who and the Mines of Terror was a 1985 platform video game developed and published by Micro Power. It featured the Sixth Doctor and Splinx.

The Master has obtained a TIRU, a device with the ability to chop and splice time, allowing him to rearrange events in the universe. He has held up in the "Mines of Terror" on Rijar, where Heatonite, a mysterious compound vital to the construction of a TIRU, is mined.

The Time Lords send the Doctor to the mining complex. As an emissary of the Time Lords he may not bring any weapons, but he does have a highly sophisticated robot cat called Splinx.

Searching around the mines, labs and other mazes, the Doctor and Splinx collected various objects to confront and defeat the Master.[1] 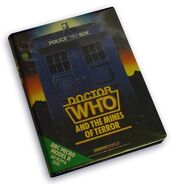