Doctor Who and the Masque of Mandragora

The Masque of Mandragora

The Doctor has to defeat not only the Mandragora energy, but the evil schemes of the murderous Count Frederico who plans to usurp the place of his nephew, the rightful ruler of the province.

It is the Italian Renaissance during the corrupt reign of the powerful Medicis. Doctor Who, angry because he was forced to land on Earth by the incredible Mandragora Helix, walks right into a Machiavellian plot. The unscrupulous Count Frederico plans to usurp the rightful rule of his naive nephew. This, with the help of Hieronymous, influential court astrologer and secret cult member.

Intent on righting all wrongs, Doctor Who studies their political manoeuvres. He uncovers a larger, even more malevalent plot - a plot to rule not only San Martino Province, but the entire world! Hieronymous has been taken over - both in mind and body - by the Mandragora energy ball, an alien, but all-powerful intelligence. Using Hieronymous and his cult members as a bridgehead, the Mandragora Helix intends to conquer Earth and dominate its people!

The question is, will Doctor Who provide a true Renaissance man? Will he be able to drain the Mandragora of its power and foil the Count as well?

Doctor Who is a mysterious, zany, and very mature Time Lord (750 years mature to be exact) who hurries through time in a stolen Time Machine. Since three's a problem with the steering, he never lands exactly when or where he plans to. This, along with his desperate desire to bring law and order to the galaxy, and his insatiable curiosity, consistently places him in weird and often wild circumstances.

'I CAN TELL YOUR FUTURE,' RETORTED THE DOCTOR, 'AND IT'S LIKELY TO BE VERY SHORT AND VERY UNPLEASENT UNLESS YOU LISTEN TO ME...'

Doctor Who - The Masque of Mandragora was first broadcast in 1976 and was written by Louis Marks. This adaptation is by Philip Hinchcliffe, who was producer of the programme for three seasons.

This Target Book was released on 16 April 2009 complete and unabridged by BBC Audio and read by Tim Piggott-Smith. 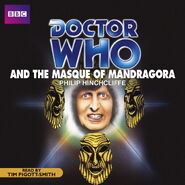 Retrieved from "https://tardis.fandom.com/wiki/Doctor_Who_and_the_Masque_of_Mandragora_(novelisation)?oldid=2791856"
Community content is available under CC-BY-SA unless otherwise noted.