Doctor Who and the Krikkitmen (novelisation)

Doctor Who and the Krikkitmen

ISBN 978-1-78594-105-4
Doctor Who and the Krikkitmen by James Goss was a novelisation of the unproduced Douglas Adams story The Krikkitmen.

Intergalactic war? That's just not cricket ... or is it?

The Doctor promised Romana the end of the universe, so she's less than impressed when what she gets is a cricket match. But then the award ceremony is interrupted by eleven figures in white uniforms and peaked skull helmets, wielding bat-shaped weapons that fire lethal bolts of light into the screaming crowd. The Krikkitmen are back.

Millions of years ago, the people of Krikkit learned they were not alone in the universe, and promptly launched a xenophobic crusade to wipe out all other life-forms. After a long and bloody conflict, the Time Lords imprisoned Krikkit within an envelope of Slow Time, a prison that could only be opened with the Wicket Gate key, a device that resembles – to human eyes, at least – an oversized set of cricket stumps...

From Earth to Gallifrey, from Bethselamin to Devalin, from Krikkit to Mareeve II to the far edge of infinity, the Doctor and Romana are tugged into a pan-galactic conga with fate as they rush to stop the Krikkitmen gaining all five pieces of the key. If they fail, the entire cosmos faces a fiery retribution that will leave nothing but ashes...

Chapter One: Important and Exciting Galactic History. Do Not Skip.[]

Narration from the Matrix

Of the many problems in the Galaxy, a large one arose with the first major civilisation, Alovia. The Alovians were extremely aggressive and tried taking out their problems on potatoes; however they soon started attacking each other, which over a few centuries led to interstellar war. The Alovians decided to build an Ultimate Weapon to protect them. To do this they built a supercomputer called Hactar, a black moon orbiting Alovia, with every organic particle of it being aware of and containing the design of the computer as a whole. Hactar created the Supernova Bomb, a weapon which, when detonated, would connect every major sun and create a giant supernova. However, when they pressed the button, the bomb did not work. Hactar began to explain that “there was no conceivable consequence of not setting the bomb off that was worse than the known consequence of setting it off”, but before he could continue the Alovians destroyed the computer with missiles. However, the Alovians blew themselves up not much later.

The Doctor has taken Romana to a cricket match at Lord's, much to her surprise. She notes that the humans there have no knowledge of the true significance of cricket. She is confused why they are there as she remembers the Doctor saying the universe would be ending and giving her a tie for the occasion.

As they exit the TARDIS, they push through an angry crowd. The Doctor notes they are angry because of "race memory", and they wouldn't know why. Romana persists in asking why they are at a cricket match instead of the end of the universe, but the Doctor simply remarks any Englishman would say those are the same thing. He notes that oddly, cricket seems rather harmless and innocent enough. Romana agrees, as the Doctor explains the Ashes. As the crowd grows excited, the Doctor suddenly vanishes.

Romana notices the Doctor is on the cricket pitch. He tries to convince the Australian captain to give him the Ashes, which are being presented to the English team. He warns them to no avail, and then tries to take the trophy. Then suddenly, killer robots arrive.

A cricket pavilion appears out of thin air, and eleven immaculate figures dressed in cricket whites exit it. The Doctor tells the captain to let him give them the trophy, but he does not take them seriously. The Killer Robots begin their massacre, all in the form of a cricket game. Romana materialises the TARDIS in front of the Doctor, on its side in an attempt to create a barricade. One of the robots snatches the Ashes, and they return to their pavilion, which disappears. The Doctor and Romana come to terms with the fact that it is indeed the return of a Time Lord legend, the Krikkitmen.

Romana reflects on Gallifrey, thinking how she was originally to return shortly after helping the Doctor, but instead they had gone on adventures. She realises that they need to return, and that the Time Lords would not be happy she was missing. She and the Doctor remember that he is actually the incumbent Lord President. After waiting, they are confronted by the Chancellery Guard and marched into the Capitol, where they meet Cardinal (and Acting President) Borusa. Borusa is quite unhappy to see them, but leads them through Gallifrey's data core to the Great Matrix Chamber. The Doctor and Romana encounter K9, who proclaims the Matrix is at fault, despite Borusa's claim that since it had not foreseen the return of the Krikkitmen, it was not true. Romana decides they must examine the Matrix's knowledge of the Krikkitmen, by going into it.

The Doctor, Romana and K9 enter the virtual reality of Krikkit, as the Matrix narrates to them. It describes how the natives, the Krikkitas, were content with everything they had on their planet, isolated in a dust cloud. There were no stars visible, so the Krikkitas had no clue there was (or even could be) other life in the universe, until a spacecraft crashed. They reverse engineered the technology and built a spacecraft of their own, and left the dust cloud to find the rest of the universe. They could not cope with its existence and immediately decided it would have to go. The Doctor and Romana observe as the scientists of Krikkit create the technology to wage universal warfare, and ultimately, the Krikkitmen— androids who then attacked all of the Galaxy.

Due to supernatural forces, the Galaxy happened to be enjoying an unusually prosperous period of peace. This peace was represented by the Wicket Gate, a symbolic monument which appropriately happened to be the first thing destroyed by the Krikkitmen. The following thousand years were those of carnage and destruction, the Krikkit Wars. The war only ended when the Time Lords broke their non-interference policy and assisted the rest of the Galaxy. But then came the issue of what to do with the Krikkitas...

Chapter Eight: So Much for Universal Peace[]

The Doctor, Romana and K9 exit the Matrix and decide travel to the end of the Krikkit Wars to see for themselves what actually happened. They find themselves in a galactic meeting where the fate of the Krikkitas is being decided, overseen by the Time Lords. They announce they have a solution, and lead the delegates to privately discuss in the First Great War TARDIS, which K9 breaks into. Battle Cardinal Melia proposes instant annihilation of Krikkit, but the rest opt for the "Plan B"— Krikkit is encased in an impenetrable envelope of Slow Time, to be released at the end of the universe when all other life has ceased to exist. The Doctor worries this plan seems too failsafe, and cannot ask Melia as he has disappeared. Suddenly, a Krikkitman approaches them. 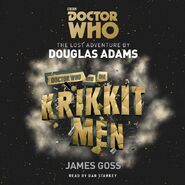 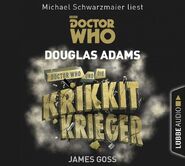