Doctor Who and the Keeper of Traken (novelisation)

Doctor Who and the Keeper of Traken

The Keeper of Traken

37 (given to later editions)

Doctor Who and the Keeper of Traken was a novelisation based on the 1981 television serial The Keeper of Traken. The original cover art had the distinction of being one of the first to showcase a companion without the Doctor, in this case Nyssa.

For ages past, the Union of Traken has lived in peace and harmony thanks to the power of the Source, controlled by generations of Keepers.

But the current Keeper, his powers waning, senses some all-pervading evil about to invade his world. He summons the Fourth Doctor to his aid.

To save Traken the Doctor fights the terrifying Melkur – only to find that this new enemy conceals an older and even deadlier foe – one the Doctor has encountered before...

'THE KEEPER IS DYING...NOTHING CAN BE NORMAL AT SUCH A TIME.'

Under the watchful control of generations of guardians known as Keepers, the harmonious power of the bioelectronics Source has enabled the planet of Traken to exist in peace for numerous millennia. The current Keeper's millennium is about to end; but before his powers wane completely, he senses the approach of an all-pervading force of evil about to inhabit the world of Traken. He calls on the Doctor to help save the future generations from an impending disaster, but the new Keeper is already staking his claim to the Source. As Melkur becomes the new keeper of Traken, the Doctor realises that his new enemy is an even deadlier foe - one he has met before!

The Keeper of Traken saw the introduction of Sarah Sutton as the lovely Nyssa, who went on to accompany the fifth Doctor.

This Target Book was released as an audiobook on 1 October 2020 complete and unabridged by BBC Audio and read by Geoffrey Beevers. 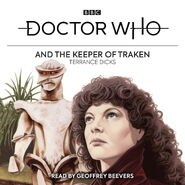