Doctor Who and the Invisible Enemy (novelisation)
left

A mysterious cloud drifts menacingly through space...
A sudden energy flash and the Doctor is infected with the Nucleus of a malignant Virus that threatens to destroy his mind.
Meanwhile, on Titan, human slaves prepare the Hive from which the Virus will swarm out and infect the universe.
In search of a cure, Leela takes the Doctor to the Foundation where they make an incredible journey into the Doctor’s brain in an attempt to destroy the Nucleus.
But can the Doctor free himself from the Nucleus in time to reach Titan and destroy the Hive? Luckily he has help – in the strangely dog-like shape of a mobile computer called K9 …

Retrieved from "https://tardis.fandom.com/wiki/Doctor_Who_and_the_Invisible_Enemy_(novelisation)?oldid=546310"
Community content is available under CC-BY-SA unless otherwise noted.
... more about "Doctor Who and the Invisible Enemy (novelisation)"
RDF feed
Has image
File: 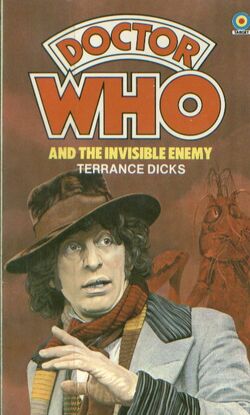