Doctor Who and the Invisible Enemy (novelisation)

This was originally to be reprinted in spring 1994, along with Doctor Who and the Horror of Fang Rock. The cover art would have been by Alister Pearson.

This Target Book was released as an audiobook on 2 August 2018 complete and unabridged by BBC Audio and read by John Leeson. 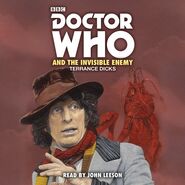