Doctor Who and the Image of the Fendahl (novelisation)

This Target Book was released as an audiobook on 6 February 2020 complete and unabridged by BBC Audio and read by Louise Jameson. 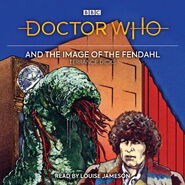 Community content is available under CC-BY-SA unless otherwise noted.
... more about "Doctor Who and the Image of the Fendahl (novelisation)"
RDF feed
Doctor
Fourth Doctor +
Has image
File:Image of The Fendahl novel.jpg +
Isbn
ISBN 0-426-20077-2 +
Publisher
Target Books +  and W.H. Allen +
Advertisement