Doctor Who and the Ice Warriors (novelisation)

Doctor Who and the Ice Warriors

The Brittanicus Base, the future

33 (given to later editions)

The world is held in the grip of a second Ice Age, and faces total destruction from the rapidly advancing glaciers.

DOCTOR WHO, with Victoria and Jamie, lands at a top scientific base in England, where they have just unearthed an ancient ICE WARRIOR. Aliens from Mars, preserved in the ice for centuries and now revitalised, the Ice Warriors feel ready to take over...

Can the Doctor overcome these warlike Martians and halt the relentless approach of the ice glaciers...?

Varga struck the fractured ice with his great fist. He faced his comrades bodly and barked a command at their lifeless forms: "Awake from the dead!"

The world is in the grip of a second Ice Age. Despite a coordinated global effort, the glaciers still advance. But they are not the only threat to the planet.

Buried deep in the ice, scientists at Brittanicus Base have discovered an ancient warrior. But this is no simple archaeological find. What they have found is the commander of a spaceship that crashed in the glacier thousands of years ago. Thawed from the ice, and knowing their home Mars is a dead world, the Ice Warriors decide to mare Earth their own...

Can the Doctor and his friends overcome the warlike Martians and halt the advance of the glaciers?

Featuring the Second Doctor as played by Patrick Troughton, and his companions Jamie and Victoria.

This Target Book was released as an audiobook on 7 January 2010 complete and unabridged by BBC Audio and read by Frazer Hines. 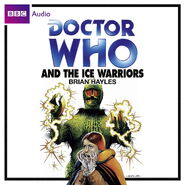