Doctor Who and the Horror of Fang Rock (novelisation)

Doctor Who and the Horror of Fang Rock

32 (given to later editions)

On a remote rocky island a few miles off the Channel coast stands the Fang Rock lighthouse. There have always been tales of the beast of Fang Rock, but when the Tardis lands here with Leela and the Fourth Doctor, the force they must deal with is more sinister and deadly than the mythical beast of the past.

It is the early 1900s, electricity is just coming into common usage, and the formless, gelatinous mass from the future must use the lighthouse generators to recharge its system. Nothing can stop this Rutan scout in its search and its experimentation on humans ...

This book was originally going to be reprinted in Spring 1994, along with Doctor Who and the Invisible Enemy (novelisation) . It was announced in DWM 203.

This Target Book was released as an audiobook on 2 February 2017 complete and unabridged by BBC Audio and read by Louise Jameson. 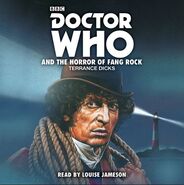