Doctor Who and the Giant Robot (novelisation)

Doctor Who and the Giant Robot

Junior Doctor Who and the Giant Robot

28 (given to later editions)

You may be looking for the unrelated comic story.

Doctor Who and the Giant Robot was a novelisation based on the 1974 television serial Robot. The first edition utilised a unique variant of the Doctor Who logo, incorporating an image of the Fourth Doctor within the O in Who (Otherwise, the Doctor is absent from the main art, the first time this had occurred since the first edition of Doctor Who and the Crusaders nearly a decade before).

Although the idea of incorporating the Doctor's face into the logo was later dropped, the books continued to use this version of the series logo for the rest of the decade. The first hardcover edition did not appear until more than eleven years later.

The Brigadier stared in amazement as the Robot began to grow ... and grow ... swelling to the size of a giant!

Slowly the metal colossus, casting its enormous shadow upon the surrounding trees and buildings, began to stride towards the Brigadier. A giant metal hand reached down to grasp him ... Can DOCTOR WHO defeat the evil forces controlling the Robot before they execute their plans to blackmail — or destroy — the world?

The first adventure of DOCTOR WHO's 4th incredible incarnation!

Still weakened by this third regeneration, the Doctor, along with Sarah, the Brigadier, and Harry Sullivan, faces the threats made by a group of dissident scientists, including the icy Miss Winters, to enslave the world - or perhaps to destroy the planet entirely.

Written by Terrance Dicks and broadcast in 1974, this story was first published under the title The Giant Robot. It was the first television story ever to feature the Fourth Doctor, as played by Tom Baker - regarded by many as the definitive Doctor. Robot also introduced Harry Sullivan to the TARDIS crew.

This Target Book was released as an audiobook on 5 November 2007 complete and unabridged by BBC Audio and read by Tom Baker.

The cover blurb was retained in the accompanying booklet with sleevenotes by David J. Howe. Music and sound effects by Simon Power.

It was later reissued as an MP3-CD alongside action figures of a Weeping Angel and a Cyberman as part of Character Options' Panodrica wave. Additionally, it was broadcast on BBC Radio 7 that same year, serialised in 8 parts from 5th-9th and 12th-14th April 2010. 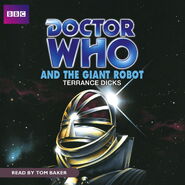 Main article: Junior Doctor Who and the Giant Robot.

In 1980, Terrance Dicks published a shorter version of this novel aimed at younger readers; it was one of two such experiments; the other was The Brain of Morbius.