Doctor Who and the Genesis of the Daleks (novelisation)

Doctor Who and the Genesis of the Daleks

Genesis of the Daleks

Time: The Birth of the Daleks

After a thousand years of futile war against the Thals, DAVROS has perfected the physical form that will carry his race into eternity – the dreaded DALEK. Without feeling, conscience or pity, the Dalek is programmed to EXTERMINATE. At the command of the Time Lords, DOCTOR WHO travels back through time in an effort to totally destroy this terrible menace of the future.

But even the Doctor cannot always win ...

'ALIEN.' CHOAKED THE DALEK SUDDENLY. 'EXTERMINATE!' SLOWLY THE GUN STICK RAISED UNTIL IT WAS POINTING STRAIGHT AT THE DOCTOR...

Skaro, a scarred, ravaged planet, where the war between the Thals and the Kaleds is reaching its final stages. And Davros, the Kaleds' greatest mind, has finally perfected the machine which will house the mutated creatures into which the Kaleds will finally evolve...

The Daleks are about to be born, and the Doctor is sent back through time in an attempt to destroy utterly this terrible threat to the future...

Doctor Who - Genesis of the Daleks was first broadcast in 1975 and was written by Terry Nation, the creator of the Daleks. This novelization is by Terrance Dicks, who was script editor of the series for five years; he is also the author of Exodus, the second novel in the TYMEWYRM series of original Doctor Who fiction.

The Time Lords have a mission for the Doctor. Together with Sarah and Harry, he finds himself stranded on Skaro where the conflict between the Thals and the Kaleds has been raging for a thousand years. Kaled scientist Davros has perfected a life support system and travel machine for the creature he knows his race will ultimately evolve into - the Dalek.

The Doctor must stop the creation of the Daleks, or perhaps affect their development so they evolve into less aggressive creatures. But with Davros's plans to destroy the Thals and to wipe out any dissenters among his own ranks in progress, is the Doctor already too late?

THIS NOVEL IS BASED ON A DOCTOR WHO STORY WHICH WAS ORIGINALLY BROADCAST FROM 8 MARCH-12 APRIL 1975.

Featuring the Fourth Doctor as played by Tom Baker with his companions Sarah Jane Smith and Harry Sullivan.

An audiobook version read by Terry Molloy was released by the RNIB in July 2012. It was only available to the registered blind. A second version was released on 5 October 2017 complete and unabridged by BBC Physical Audio and read by Jon Culshaw with Dalek voices by Nicholas Briggs. 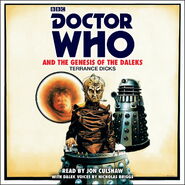 Community content is available under CC-BY-SA unless otherwise noted.
... more about "Doctor Who and the Genesis of the Daleks (novelisation)"
RDF feed
Doctor
Fourth Doctor +
Has image
File:Genesis of The Daleks novel.jpg +
Isbn
ISBN 0-426-11260-1 +
Publisher
Target Books +, W.H. Allen +  and Pinnacle Books +
Advertisement