Doctor Who and the Face of Evil (novelisation)

Doctor Who and the Face of Evil

The Face of Evil

25 (given to later editions)

Setting the controls for Earth, the Doctor is surprised when the Tardis lands in a primeval forest. Has the Tracer gone wrong or has some impulse deep in the unconscious mind directed him to this alien planet? In investigating the forest, the Doctor meets and assists Leela, a warrior banished from her tribe, the Sevateem. Through Leela, it gradually becomes apparent that the constant war between the Sevateem and the Tesh has been instigated by the god they both worship, Xoanon.

The Doctor must not only do battle with Xoanon, but also must escape from the savage practices of the Sevateem, and the technically mind-controlling destructive impulses of the Tesh.

'WHEN XOANON GETS DESPERATE ENOUGH, HE'S GOING TO DESTROY EVERYTHING...'

Thinking the controls are set for earth, the Doctor is surprised when the TARDIS lands in a huge primeval forest where chaos reigns - chaos for which the Doctor is partially responsible. This is the home of the Sevateem and Tesh tribes, who are constantly engaged in savage wars to appease their god Xoanon.

Through meeting Leela, the young female warrior banished by her tribe, the Doctor discovers that the constant raging battles between them are instigated by none other than Xoanon, in reality an all-powerful giant computer. With Leela as his companion, the Doctor must not only battle with Xoanon, but reconcile the differences with the two tribes - who are both intent on subjecting them to their savage law.

The Face of Evil was the creation of one of the TV Series' most memorable teams; Tom Baker as the Doctor and Louise Jameson as the warrior Leela.

1989 Star Books edition.
Front and Back Covers by Jeff Cummins and Andrew Skilleter

Another audiobook was on 7 April 2022 complete and unabridged by BBC Audio and read by Louise Jameson. 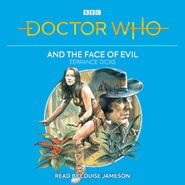