Doctor Who and the Enemy of the World (novelisation)

Doctor Who and the Enemy of the World

The Enemy of the World

24 (given to later editions)

In the year 2030 only one man seems to know what action to take when the world is hit by a series of terrible natural disasters. Salamander's success in handling these monumental problems has brought him enormous power.

From the moment the Doctor, Jamie and Victoria land on an Australian beach, they are caught up in a struggle for world domination - a struggle in which the Doctor's startling resemblance to Salamander plays a vital role.

The year is 2030 and the planet Earth is struck by a series of terrible 'natural' disasters. No sooner has the TARDIS landed on an Australian beach, than the Doctor has to flee from attack. A case of mistaken identity - for he is the exact double of Salamander, a despot who will stop at nothing to achieve total control of the planet. Using this uncanny resemblance, the Doctor infiltrates the evil domain of Salamander, along with his companions Jamie and Victoria. This confusion of identity will either result in the destruction or salvation of the planet.

This Target Book was released as an audiobook on 4 July 2019 complete and unabridged by BBC Audio and read by David Troughton. 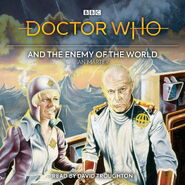