Doctor Who and the Doomsday Weapon (novelisation)

Doctor Who and the Doomsday Weapon

Doctor Who and the Doomsday Weapon was a novelisation based on the 1971 television serial Colony in Space.

The evil MASTER has stolen the Time Lords' file on the horrifying DOOMSDAY WEAPON with which, when he finds it, he can blast whole planets out of existence and make himself ruler of the Galaxy!

The Time Lords direct DOCTOR WHO and Jo Grant in TARDIS to a bleak planet in the year 2471 where they find colonists from Earth under threat from mysterious, savage, monster lizards with frightful claws! And hidden upon this planet is the DOOMSDAY WEAPON for which the MASTER is intently searching ...

Despite security precautions, the Time Lords' secret file on the devastating Doomsday Weapon is stolen by the Master.

Realising that the Master will attempt to find the weapon and use it to blast whole planets out of existence and make himself ruler of the galaxy, the Time Lords decide to intervene by enlisting the help of the Doctor - whether he likes it or not.

The Doctor and Jo Grant find themselves in the year 2471 on a bleak planet where colonists from Earth are being terrorized by savage monster lizards with fearsome claws - and where the Master hopes to lay hands on the Doomsday Weapon...

This Target book was released as an audiobook on 3 September 2007 complete and unabridged by BBC Audio and read by Geoffrey Beevers. 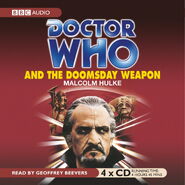