Doctor Who and the Dinosaur Invasion (novelisation)

Doctor Who and the Dinosaur Invasion

Invasion of the Dinosaurs

The Doctor walked slowly forward into the cul-de-sac. The giant dinosaur turned its head to focus on the midget now approaching... the Doctor aimed his gun to fire... suddenly from behind came a great roar of anger. He spun round – blocking the exit from the narrow street towered a Tyrannosaurus rex, its savage jaws dripping with blood...

The Doctor and Sarah arrive back in the TARDIS to find London completely deserted – except for the dinosaurs. Has the return of these prehistoric creatures been deliberately planned and, if so, who can be behind it all?

RETURN OF THE PREHISTORIC CREATURES

Three hundred and fifty million years ago, dinosaurs crawled the Earth, devouring everything in sight. But then they disappeared. Certainly, no one ever expected them to return...

When Doctor Who lands in London and finds the entire city deserted - except for dinosaurs - he figures something really weird is going on. It is. A clever group of misguided idealists is at the centre of a bizarre plot to reverse time to a golden era - an era before technology, before pollution, before the hydrogen bomb. The group is going to give the human race a second chance.

But, to implement Operation Golden Age, the past must be eliminated. The present will not exist - and only the chosen will survive.

Doctor Who must turn the clock forward to stop Operation Golden Age, but will he be able to do it before Earth's time runs out?

'WE'RE FACING THE DESTRUCTION OF HISTORY ITSELF!'

The Doctor and Sarah return from the past to find London deserted and under martial law after a sudden invasion of prehistoric monsters. Uniting with Brigadier Lethbridge-Stewart, they uncover a plot to alter time: wiping out all Earth's previous history and returning it to a golden age before technological pollution. Fighting traitors within and monsters without, the Doctor and UNIT must try and stop the deadly idealists.

This is an adaptation by Malcolm Hulke of his own original screenplay, which featured Jon Pertwee in the role of the Doctor.

'Through the windscreen, the Doctor could see the gigantic shape of a tyrannosaurus rex blocking the road.'

The Doctor and Sarah arrived in London to find it deserted. The city has been evacuated as prehistoric monsters appear in the streets. While the Doctor works to discover who or what is bringing the dinosaurs to London, Sarah finds herself trapped onboard a spaceship that left Earth months ago travelling to a new world...

Against the odds, the Doctor manages to trace the source of the dinosaurs. But will he and the Brigadier be in time to unmask the villains before Operation Golden Age changes the history of planet Earth and wipes out the whole of human civilisation?

This novel is based on a Doctor Who story which was originally broadcast from 12 January-16 February 1974.

Featuring the Third Doctor as played by Jon Pertwee with his companion Sarah Jane Smith and UNIT.

This Target Book was released as an audiobook on 5 November 2007 complete and unabridged by BBC Audio and read by Martin Jarvis.

The cover blurb was retained in the accompanying booklet with sleevenotes by David J. Howe. Music and sound effects by Simon Power. 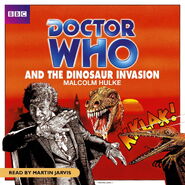