Doctor Who and the Deadly Assassin (novelisation)

Doctor Who and the Deadly Assassin

19 (given to later editions)

The Doctor is suddenly summoned to Gallifrey, the home of the Time Lords, where his ghastly hallucination of the President's assassination seems to turn into reality. When the Doctor is arrested for the murder, there is a hideous, dark, cowled figure gleefully watching in the shadows.

Faced with his old enemy, the Master, Doctor Who approaches defeat in a battle of minds in a nightmare world created by the Master's imagination. But the Master's evil intentions go much further – he has a Doomsday Plan. It is up to the Doctor to prevent him from destroying Gallifrey and taking over the universe!

1989 Star Books edition.
Front and Back Covers by Chris Achilleos and Mike Little

This Target Book was released as an audiobook on 19 March 2015 complete and unabridged by BBC Audio and read by Geoffrey Beevers. 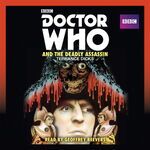