Doctor Who and the Cybermen (novelisation)

Doctor Who and the Cybermen

14 (given to later editions)

Doctor Who and the Cybermen was a novelisation based on the 1967 television serial The Moonbase.

One by one, their limbs became diseased - they were replaced by plastic and steel!

With metal limbs, they had the strength of ten men. They could live in the airless vacuum of space. They had no heart, no feelings, no emotions and only one goal - power!

In the year 2070, a small blue planet caught their attention. They would land on its satellite and, from there, attack, ransack, destroy and finally abandon...

THE SATELLITE WAS THE MOON

THEIR NAMES? THE CYBERMEN!

Can the Doctor defeat an enemy whose threat is almost as great as that of the mighty Daleks?

A mystery virus is wreaking havoc among the crew of the Earth's weather control station on the Moon.

While investigations into the strange disease are in progress, International Space Headquarters Earth puts the entire Moon base into strict quarantine - the Doctor and his companions included!

The Director of the base suspects the time-travellers. The Doctor fears that the ruthlessly evil Cybermen are at work...

"There are some corners of the universe which have bred the most terrible things. Things which are against everything we have ever believed in. They must be fought. To the death."

In 2070, the Earth's weather is controlled from a base on the moon. But when the Doctor and his friends arrive, all is not well. They discover unexplained drops of air pressure, minor problems with the weather control systems, and an outbreak of a mysterious plague.

With Jamie injured, and members of the crew going missing, the Doctor realises that the moonbase is under attack. Some malevolent force is infecting the crew and sabotaging the systems as a prelude to an invasion of Earth. And the Doctor thinks he knows who is behind it: the Cybermen.

This novel is based on "The Moonbase", a Doctor Who story which was originally broadcast from 11 February-4 March 1967.

Featuring the Second Doctor as played by Patrick Troughton, and his companions Polly, Ben and Jamie

1980 edition with the diamond logo

This Target Book was released as an audiobook on 12 March 2009 complete and unabridged by BBC Audio and read by Anneke Wills with Cybermen voices by Nicholas Briggs.

This was the first ever audiobook in which Cyberman dialogue was read by Nicholas Briggs using a modulator instead of the main narrator. Briggs did the same for the Daleks in Prisoner of the Daleks and Doctor Who and the Dalek Invasion of Earth in the same year, and has lent his voice to Dalek and Cyberman dialogue in almost all audiobooks since. 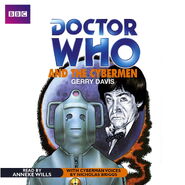