Doctor Who and the Curse of Peladon (novelisation)

Doctor Who and the Curse of Peladon

The Curse of Peladon

13 (given to later editions)

Again, the terrifying cry rang out. The Doctor quickened his pace along the gloomy tunnels of the castle. Suddenly, from the darkness lumbered the mighty Aggedor, Royal Beast and Protector of the Kingdom of Peladon!

The Doctor fumbled in his pocket. Would the device work? As he trained the spinning mirror on the eyes of Aggedor, the terrible claws came closer and closer...

What is the secret behind the killings on the Planet of Peladon? Is Aggedor seeking revenge because the King of Peladon wants the kingdom to become a member of the Galactic Federation? Will the Doctor escape the claws of Aggedor and discover the truth?

The Doctor and Jo simply meant to take a little ride in the TARDIS, to check that it was working. There was a small fault in the Interstitial Beam Synthesizer, perhaps, but nothing that couldn't be fixed...

But instead the TARDIS takes them to Peladon, a medieval world which is seeking membership of the Galactic Federation. Delegates have gathered on the planet from all over the galaxy, and among them are representatives from Alpha Centauri, from Archturus and, from Mars, some of the Doctor's oldest and most dangerous enemies...

This is a novelization by Brian Hayles of his own original television story, which featured Jon Pertwee in the role of the Doctor.

In July 1995, BBC Audio released an abridged audiobook version of the novel, read by Jon Pertwee. It became part of the BBC MP3-CD Audio sampler Tales from the TARDIS Volume 1, "Ten hours on just one disc".

This story was also released as an audiobook on 2 May 2013 complete and unabridged by BBC Audio and read by David Troughton. 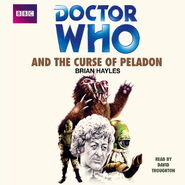