Doctor Who and the Creature from the Pit (novelisation)

Doctor Who and the Creature from the Pit

The Creature from the Pit

11 (given to later editions)

Beginning with this release and continuing for the remainder of the novelisation series, there was a concerted effort made by Target Books to commission the original teleplay writers to novelise their own scripts whenever possible (with Terrance Dicks serving as a backup writer if this wasn't possible). Although Fisher was a recent contributor to the series, this notion would later extend to include writers of episodes dating back to the 1960s.

The planet Chloris is very fertile, but metal is in short supply, and has therefore become extremely valuable.

A huge creature, with most unusual physical properties, arrives from an alien planet which can provide Chloris with metal from its own unlimited supplies, in exchange for chlorophyll.

However, the ruthless Lady Adrasta has been able to exploit the shortages of metal to her own advantage, and has no wish to see the situation change.

The Doctor and Romana land on Chloris just as the creature's alien masters begin to lose patience over their ambassador's long absence.

The action the aliens decide to take will have devastating consequences for Chloris, unless something is done to prevent it...

This Target Book was released as an audiobook on 7 April 2008 complete and unabridged by BBC Audio and read by Tom Baker.

The audiobook was broadcast on BBC Radio 7, serialized into seven parts, between 27th-30th April and 3rd-5th May 2010. 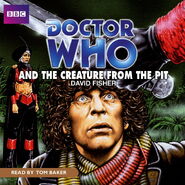 Community content is available under CC-BY-SA unless otherwise noted.
... more about "Doctor Who and the Creature from the Pit (novelisation)"
RDF feed
Doctor
Fourth Doctor +
Has image
File:Creature from The Pit novel.jpg +
Isbn
ISBN 0-426-20123-X +
Publisher
Target Books +  and W.H. Allen +
Advertisement