Doctor Who and the Claws of Axos (novelisation)

Doctor Who and the Claws of Axos

The Claws of Axos

10 (given to later editions)

The creatures stood before them, beautiful golden humaniods, offering friendship and their priceless Axonite, in return for - what?

Only DOCTOR WHO remains suspicious. What is the real reason for the Axon's sudden arrival on Earth? And why is the evil Master a passenger on their spaceship? He very soon finds out...

This Target Book was released as an audiobook 2 June 2016 complete and unabridged by BBC Physical Audio and read by Richard Franklin. 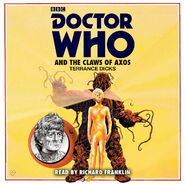