Doctor Who and the Carnival of Monsters (novelisation)

8 (given to later editions)

The Doctor and Jo land on a cargo ship crossing the Indian Ocean in the year 1926.

Or so they think.

Far away on a planet called Inter Minor, a travelling showman is setting up his live peepshow, watched by an eager audience of space officials

On board ship, a giant hand suddenly appears, grasps the Tardis and withdraws. Without warning, a prehistoric monster rises from the sea to attack.

What is happening? Where are they? Only the Doctor realises, with horror, that they might be trapped ...

Programming the TARDIS to visit the attractive planet of Metebelis 3, the Doctor and Jo are disappointed to find they've arrived in a cargo ship bound for Singapore. Or so they think. In fact, they are trapped in a time-loop on the far away planet Inter Minor, where all the life-forms of the Galaxy miniaturised in the Scope - a peepshow for arch-showman Vorg. These lifeforms include the terrifying Drashigs - huge underwater dragons who add to the monumental problems the Doctor and Jo face in trying to escape this nightmare circus.

An unabridged audiobook of the story was recorded by Gabriel Woolf for the RNIB in 1978, alongside The Three Doctors and The Loch Ness Monster.

This Target Book was released again on 13 November 2014 complete and unabridged by BBC Audio and read by Katy Manning.

The 2014 audiobook was reissued as part of The Second Monsters Collection on 28 January 2021. 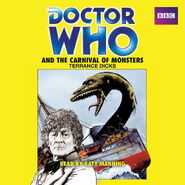 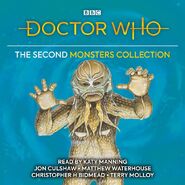