Doctor Who and the Brain of Morbius (novelisation)

7 (given to later editions)

Why do so many spaceships crashland on Karn, a bleak, lonely and seemingly deserted planet?

Are they doomed by the mysterious powers of the strange, black-robed Sisterhood, jealously guarding their secret of eternal life? Or does the mad Dr Solon, for some evil purpose of his own, need the bodies of the victims? And more especially, the body of DOCTOR WHO ...

MAREN LEANED FORWARD AND GAZED INTO THE CRYSTAL. 'NOW IS THE MOMENT, SISTER. THE TIME LORD SLEEPS, HE CANNOT PROTECT HIMSELF AGAINST US...'

On the bleak and lonely planet of Karn, the mysterious Sisterhood guards the Sacred Flame, from which the Elixir of Life comes. But the Flame is dying...

Elsewhere on the planet, the renegade Time Lord Morbius awaits the creation of a monstrous new body which will give him the power to rule the Galaxy.

Doctor Who - The Brain of Morbius is available on BBC Video and has recently been broadcast on BSB television.

Main article: Junior Doctor Who and the Brain of Morbius.

In 1980, Terrance Dicks published a shorter version of this novel aimed at younger readers; it was one of two such experiments.

This Target Book was released as an audiobook on 4 February 2008 complete and unabridged by BBC Audio and read by Tom Baker. 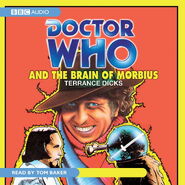