Doctor Who and the Auton Invasion (novelisation)

Doctor Who and the Auton Invasion

6 (given to later editions)

You may be looking for the book that exists within the DWU.

After the successful reprinting of three novelisations dating back to 1964 and 1965, the Target Books novelisations line began in earnest with Doctor Who and the Auton Invasion, the first original Target novelisation to be published. Despite it being an adaptation of Spearhead from Space, the opening chapter of the book also partially adapts episode 10 of the preceding story, The War Games. With this book, Target continued the practice, introduced with Doctor Who in an Exciting Adventure with the Daleks, of using titles substantially different from the original TV serial. This practice would continue off-and-on before being mostly abandoned by the mid-1970s, although the title format Doctor Who and the ... and variations therefore would continue to be used until the early 1980s.

In this, the first adventure of his third `incarnation', DOCTOR WHO, Liz Shaw, and the Brigadier grapple with the nightmarish invasion of the AUTONS — living, giant-sized, plastic-modelled `humans' with no hair and sightless eyes; waxwork replicas and tailor's dummies whose murderous behaviour is directed by the NESTENE CONSCIOUSNESS — a malignant, squid-like monster of cosmic proportions and indescribably hideous appearance.

“This DOCTOR WHO adventure (televised as 'Spearhead from Space') wins my vote as the best in the lifetime of this series so far.' Mathew Coady, The Daily Mirror

“DOCTOR WHO, the children's own programme which adults adore...” Gerard Garrett, The Daily Sketch

A mysterious shower of meteorites lands in Essex, and Brigadier Lethbridge-Stewart of UNIT has reason to believe that they have been deliberately aimed at the Earth's surface.

The Doctor joins forces with the Brigadier and Liz Shaw in a desperate bid to prevent the nightmarish invasion of the sinister Autons. Living models of human beings - like waxwork dummies - their murderous behavior is controlled and directed by the Nestene Consciousness, a malignant, squid-like monster of cosmic proportions and indescribably hideous appearance.

"You will be exiled to Earth in the Twentieth Century Time Zone. You will remain there for as long as we think proper. And for that time the secret of the TARDIS will be taken from you."

Found guilty by his fellow Time Lords of interference in the affairs of other planets, the Doctor is forced to undergo his second regeneration and is exiled to Earth.

But strange meteorites are landing in Essex and Brigadier Lethbridge-Stewart of UNIT has reason to believe that they were deliberately aimed at the Earth's surface. In order to avert a possible catastrophie the Doctor joins forces with UNIT and battles with the sinister Autons - creatures whose murderous behaviour is directed by the Nestene Consciousness, a hideous entity of cosmic proportions.

This story was written by Robert Holmes and broadcast under the title The Spearhead from Space (sic.). It was the first programme to feature Jon Pertwee in the role of the Doctor and marks the beginning of his Earth-bound adventures.

Doctor Who - The Spearhead from Space has recently been broadcast on BSB television.

"Here at UNIT we deal with the odd-the unexplained. We're prepared to tackle anything on Earth. Or even from beyond the Earth, if necessary."

Put on trial by the Time Lords, and found guilty of interfering in the affairs of other worlds, the Doctor is exiled to Earth in the 20th century, his appearance once again changed. His arrival coincides with a meteorite shower. But these are no ordinary meteorites.

The Nestene Consciousness has began its first attempt to invade Earth using killer Autons and Deadly window shop dummies. Only the Doctor and UNIT can stop the attack. But the Doctor is recovering in hospital, and his old friend the Brigadier doesn't even recognise him. Can the Doctor recover and win UNIT's trust before the invasion begins?

This novel is based on "Spearhead From Space", a Doctor Who story which was originally broadcast from 3 January-24 January 1970.

Featuring the Third Doctor as played by Jon Pertwee, his companion Liz Shaw and the UNIT organisation commanded by Brigadier Lethbridge-Stewart

"Standing towering over them was the most nightmarish creature Liz had ever seen. A huge, many tentacled monster something between spider, crab and octopus. The nutrient fluids from the tank were still streaming downs its sides. At the front of its glistening body a single huge eye glared at them, blazing with alien intelligence and hatred."

This Target Book was released as an audiobook on 4 June 2008 complete and unabridged by BBC Audio and read by Caroline John. Andrew Lawrence produced the reading with Michael Stevens as executive producer.

The cover blurb and thumbnail illustrations were retained in the accompanying booklet with sleeve notes by David J. Howe and music and sound effects by Simon Power.

It was later reissued as an MP3-CD alongside action figures of the Eleventh Doctor and Roman Auton as part of Character Options' Panodrica wave. 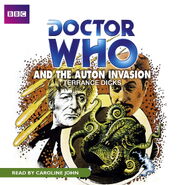