Doctor Who and the Armageddon Factor (novelisation)

Doctor Who and the Armageddon Factor

5 (given to later editions)

Some time ago, the White Guardian, one of the most powerful beings in the Cosmos, had set the Doctor an urgent task – to find and reassemble the six segments of the Key to Time.

The Doctor and Romana had successfully retrieved five of the segments and now they have reached the planet Atrios in the middle of an atomic war, to search for the last, most vital piece.

Sinister dangers await them in this final stage of their quest...

THE ARMAGEDDON FACTOR is a novel in the Key to Time Sequence. Also available THE RIBOS OPERATION, THE STONES OF BLOOD, THE ANDROIDS OF TARA and THE POWER OF KROLL.

This Target Book was released as an audiobook on 6 June 2019 complete and unabridged by BBC Audio and read by John Leeson. 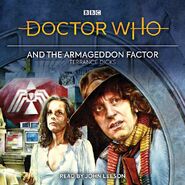